Fields of Grass to the Horizon

This post is an update on the current state of 3DWorld's tiled terrain grass rendering. I've shown infinite fields of grass in a previous post, but since then I've made some graphical improvements. For example, I'm now using GPU tessellation shaders to generate curved grass blades close to the player camera.

Near to far levels of detail include (ordered closer to further):
The tessellation, triangle merging, and height translation all happen smoothly as continuous functions over distance to prevent noticeable popping artifacts. The only visual transition that I can see is a small amount of flickering/noise when grass blades disappear under the mesh in the distance, when viewed from high above the ground. I'm not sure what causes this. Maybe it's due to depth buffer Z-fighting. The textured => untextured and wind => no wind transitions are very difficult to spot. The tessellation changes and triangle merging are nearly invisible.

A set of 32 grass tiles is generated, and random tiles are selected for use across the terrain. The vertex shader calculates the z-value (height) of each grass blade from the heightmap textures. All vertex data for all levels of detail are stored on the GPU for efficiency. Hardware instancing is used to render all instances of each of the 32 grass tiles in a single draw call.

Here is an example video where I use the camera speed modifier keys to zoom in and out on the grass. The actual rendering is much sharper; video compression has made the grass somewhat blurry. I've disabled the trees, plants, and flowers in the config.txt file to make the grass stand out more and avoid distractions. Without the overhead of video compression, this normally runs at around 300 FPS (frames per second).

As you can see, grass has a nearly seamless transition from a distance of inches to miles. The result is a lush green field that stretches out to the horizon and scrolls to follow the player camera. It's possible to have the entire terrain draw as grass at 150-200 FPS.

Note that the grass colored ground texture is always used. This is here to fill in the space between the grass so that the blades don't need to be packed together as densely to achieve a thick looking cover. The texture and grass blades use the same average colors (across texels) so that they blend together better in the distance. They also use the same normals and shader lighting calculations. To make this work, grass normals are derived from the terrain mesh normals.

Here is a series of images captured of grass, from close up to far away. There are some scattered areas of sand and dirt with lower grass density to break up the scene and add more variety. These can be seen in the last two images. Again, non-grass vegetation and other scenery has been disabled for these screenshots. 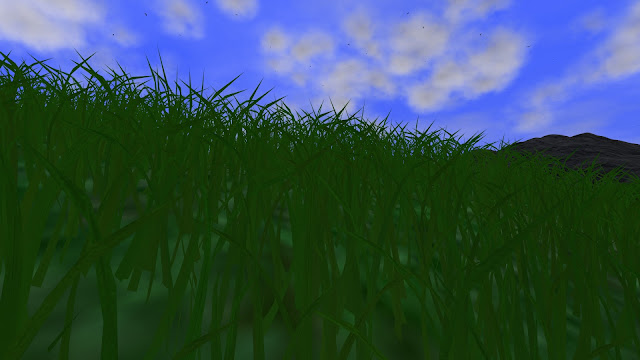 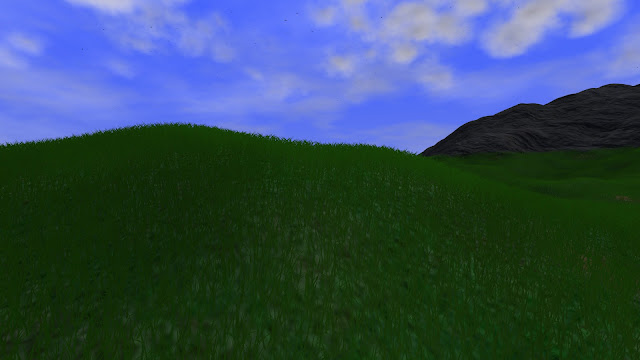 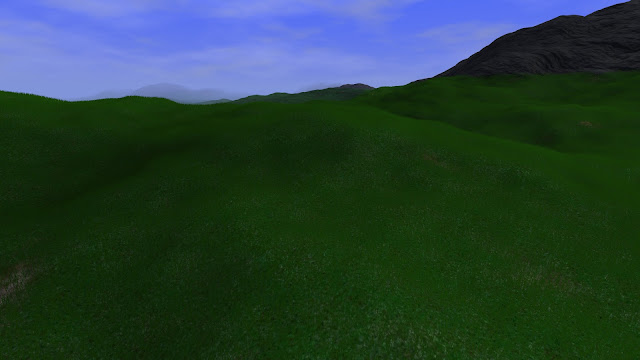 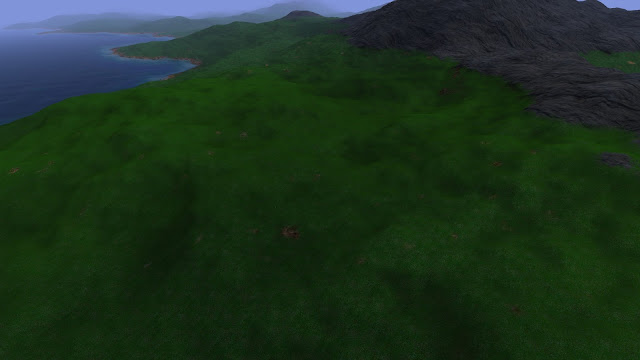 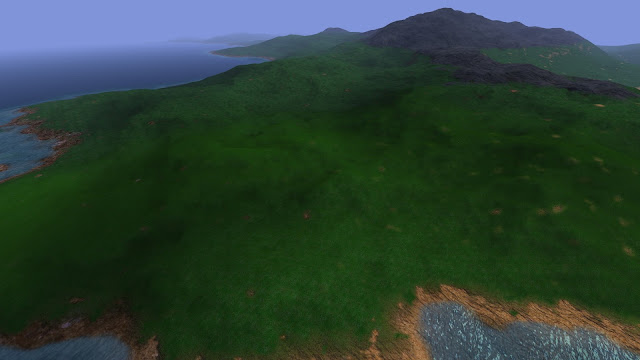 The only problem I see with this approach is the tiling artifacts of the distant grass texture. Tiling is most noticeable in the final two images. I spent some time trying to fix this, but never really succeeded. If I use a highly detailed texture, it looks too repetitive. If I use a low contrast green texture, it looks too plain and uninteresting. If I transition between texture scales, the effect is noticeable, and it ruins the immersion. I was able to get away with that last texture scale trick with water because it was moving, but apparently not with grass. Interestingly, this isn't as much of a problem with the rock and snow textures. I wonder what's different about them?
Posted by Frank Gennari at 10:43 PM 2 comments: